Pan-Pacific highlights our Fuel Oil Design and Construction Division and its growing success in recent years. Leading the charge is Mike Hoxworth, our Fuel Oil Division Director. Mike began with Pan-Pacific in 2003 and had been with the company 8 years before launching a fuel program that was specific to the design and construction needs of Pan-Pacific’s design-build work.

Mike had the fuel oil division up and running in 2011 and remembers having the first fuel meeting at Stanford Hospital. “In the beginning we didn’t have much of a database for the fuel work. To help our detailers and designers understand the system, I would hand draw each layout. Now with our BIM services we have the capability to complete the projects much faster.”

One of Pan-Pacific’s largest fuel projects to date is the LAX Rent-a-Car Facility (CONRAC) which will be the largest one of its kind to be built in the world. The project will be using gasoline rather than the more commonly used petroleum. Seven 45,000 gallon tanks are being installed supplying the facility with 315,000 gallons of gasoline. The facility will be opening 2023.

“All of our guys have to be proficient in knowing how to work in different environments including monitoring systems, confined space and all types of piping. They need to be able to adapt well to all stages of the projects including the beginning with cranes and overhead lift loads, all the way through startup and completion of the projects. Conclusion of the project includes coordination between the different AHJ inspectors, and generator startups to bring the completed system to the Owners for sign off and completion.”

Mike accounts a majority of our installs, including all of the downtown projects in San Francisco and Los Angeles, to above ground work, while OSHPD facilities are routinely underground installs. OSHPD facilities require more fuel for longer run times which requires the larger, underground tanks. These underground systems are largely more complicated due to controls and stringent requirements with multiple systems relying on Pan-Pacific’s fuel system design. Often times it is not just the system challenges, but the install itself.

“We recently had a logistically challenging install at Marin General Hospital due to the limited area to work with and the alley-like road ways for crane access. We had to navigate the oversized tank up a steep hillside and install from a slanted surface. The area was extremely narrow for the size of the tank and required top-notch safety and coordination.” The fuel tank will be used to feed the large emergency generators for the new wing of the hospital. 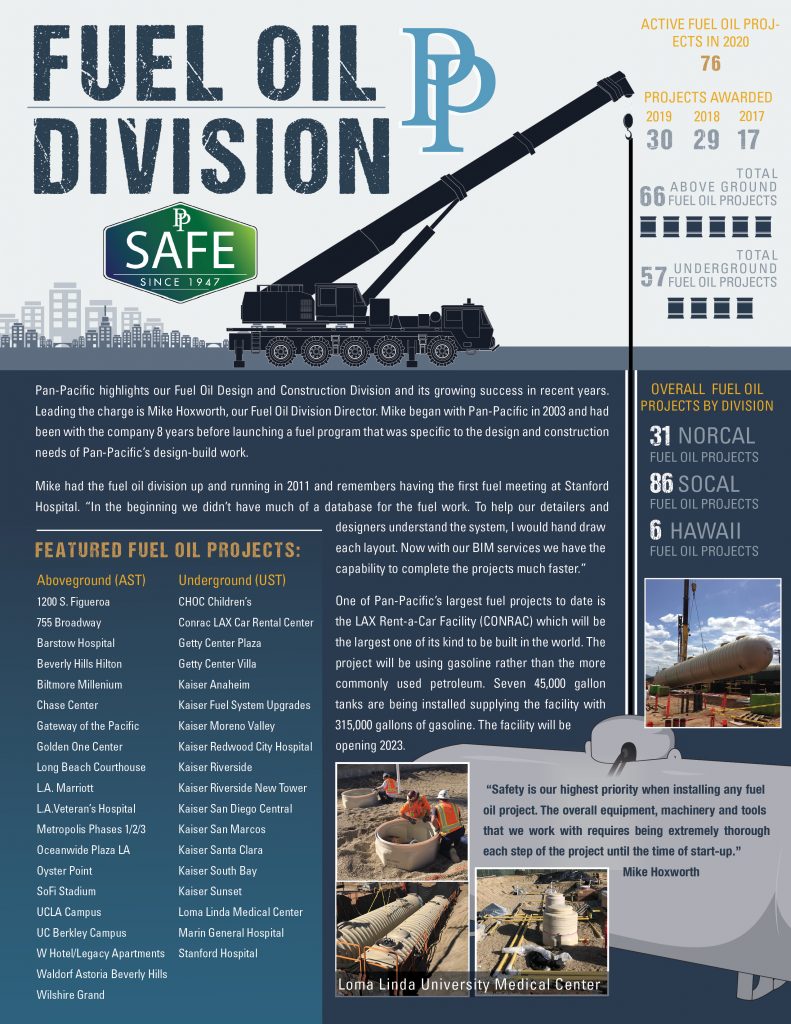